Secrets of the Viaducts: Walking the London Bridge to Greenwich Arches (Part Three) 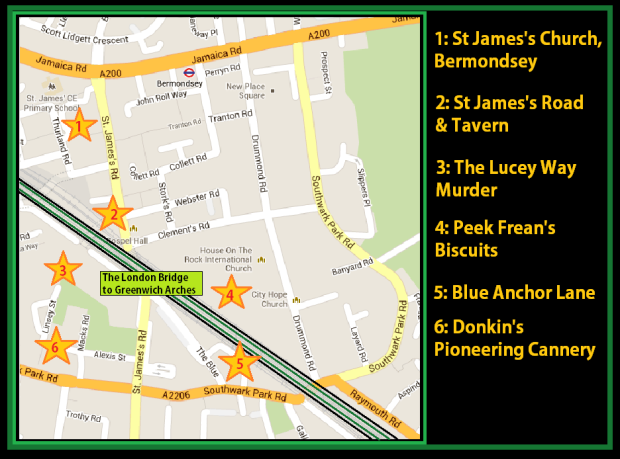 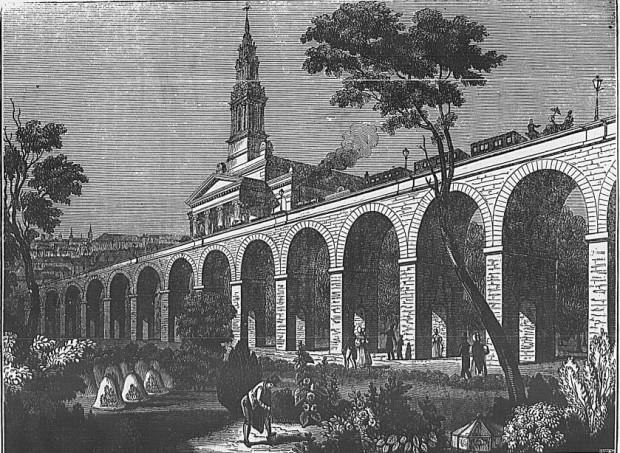 St James’s Church behind the railway arches as depicted in the 1830s.

Designed by James Savage, St James’s belongs to a group known as the ‘Waterloo Churches’; one of many built across the country with money granted by parliament as a way of celebrating peace following the defeat of Napoleon. 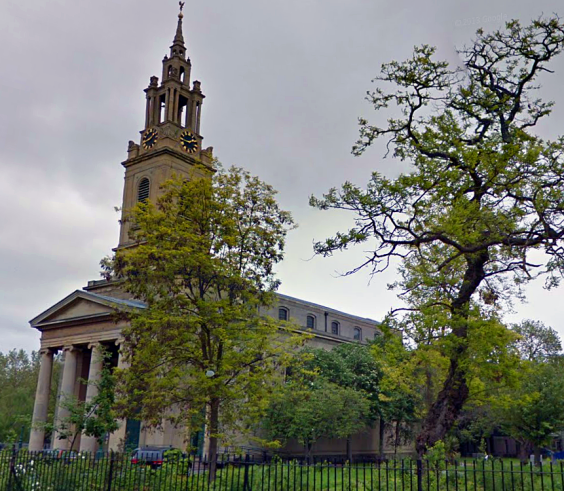 St James’s is distinctive in that its bells are cast from French cannons seized at the Battle of Waterloo.

When it opened, the church was also blessed with one of the largest pipe organs in the land.

Despite this accolade, the organ was dismantled in the 20th century, its parts stashed away in various nooks of the church for over 50 years. Luckily most of these components survived, enabling the organ to be fully restored in 2002, making it the UK’s most complete example from its era. 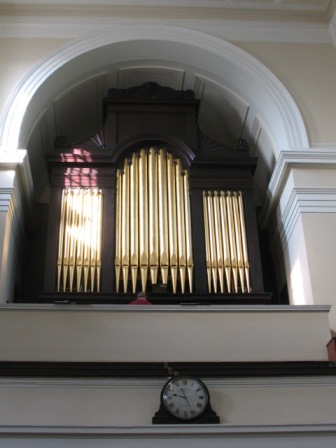 Also of note is the spire of St James’s, which is closely based upon the one designed by Sir Christopher Wren for St Stephen’s Walbrook near Mansion House. 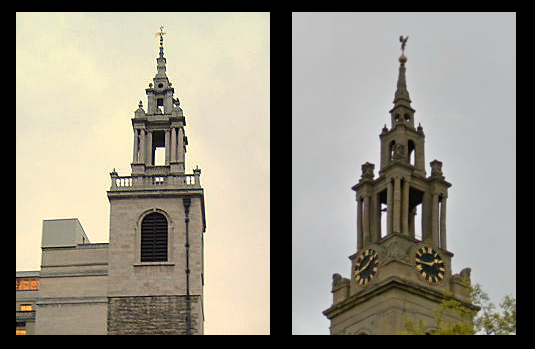 In the early 1960s there were threats to demolish St James’s church…a travesty which was thankfully avoided primarily due to the intervention of the great poet and champion of historical architecture, Sir John Betjeman.

The viaduct over St James’s Road.

In this vicinity, several of the arches are employed as a depot for Sands Films a small company specializing in costume dramas who recently provided outfits for the big-screen version of Les Miserables.

Film scenery stashed away below the arches.

The arches here also swoop past The St James Tavern; a traditional Bermondsey boozer which is home to Butchie’s of Bermondsey; a seafood stall where, if you’re feeling adventurous, you can purchase a pot of jellied eels for a truly authentic taste of London.

The St James Tavern and Butchie’s of Bermondsey.

Running alongside the pub is Linsey Street, much of which is closed in by the arches and features a bold mural, painted by local youngsters from the Salmon Youth Centre in 2003. 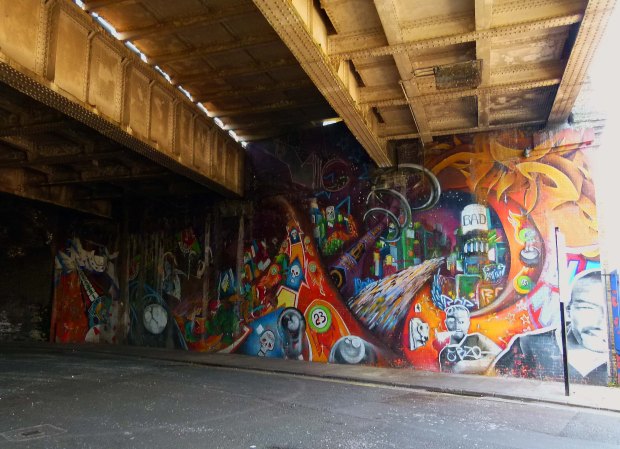 Mural beneath the Linsey Street arches.

On the other side of the viaduct, Linsey Street meets Lucey Road and Lucey Way where a lofty water tower looms over the tracks.

A Crime of Passion

In the early 1890s, a German citizen by the name of Franz Joseph Munch came to live on Lucey Road after fleeing his homeland to avoid military service. Munch found work as a baker on the same street and soon fell in love with his employer, Mrs Bridget Kenrath. 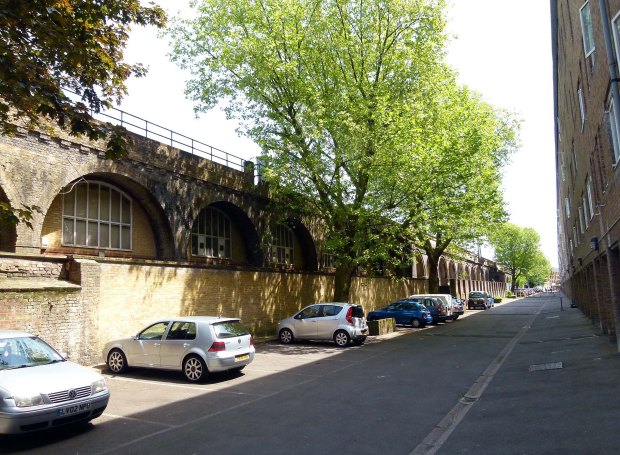 Unfortunately for Munch, there was a rival for Mrs Kenrath’s affections in the form of a fellow baker called James Hickey… as well as coming into conflict over their shared love interest, Hickey also hounded Munch with continual xenophobic slurs.

Following yet another bust-up, Hickey apparently informed Munch, “If I have ever done you any harm, you know your remedy.”

Munch did indeed know the ‘remedy’.

Shortly after the row, the German cornered Hickey, pulling a gun on his tormentor and shooting him.

Munch was quickly apprehended by two passing policemen who also took it upon themselves to haul his victim to the Lord Palmerston; a pub which once stood on Lucey Road, where the shot man managed to down a brandy before dying.

Whilst in court, Munch is reported to have “laughed several times and appeared quite unconcerned”, admitting that the murder was the result of a love affair.

Sentenced to death, he appealed on the grounds that he’d been subject to extreme provocation and looked to the German embassy for assistance… but when they discovered Munch had originally fled to London to avoid conscription, they informed their fellow countryman that he was on his own.

Munch was executed at Wandsworth prison on 21st July 1891.

After rattling over Linsey Street and St James’s Road, the railway arches pass through a stretch bordered by Blue Anchor Lane, Bombay Street and Drummond Road.

In 1857, James Peek and George Hender Frean established a biscuit factory on Drummond Road; the buildings of which still back onto the arches of the London and Greenwich Railway. 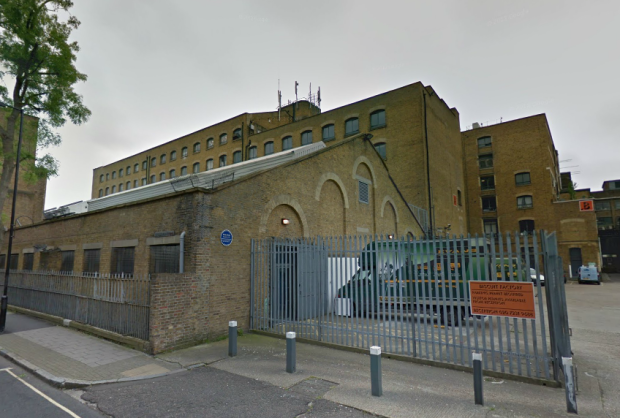 The crumbly treats baked in Bermondsey by Peek and Frean became immensely popular and were soon being exported to places as far away as India and Australia. 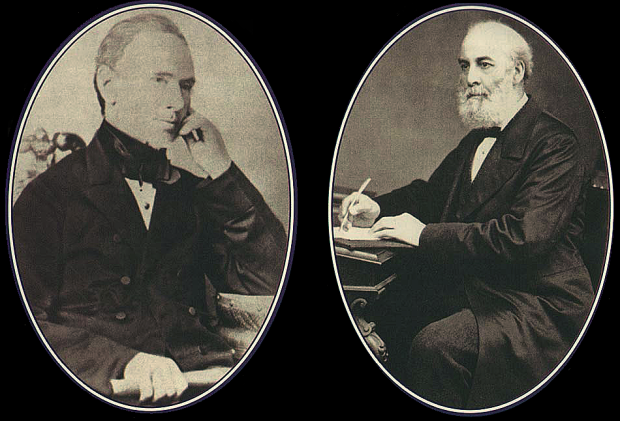 It was in the Drummond Road factory that the Marie (the world’s first chocolate biscuit when introduced in 1875), the Garibaldi, the Bourbon (originally known as the ‘Cream Sandwich’) and many more were invented, the creation of which sent delicious smells wafting over Bermondsey for many decades- a welcome contrast to the stinking tanneries which lurked on the streets closer to London Bridge….

In 1906, ‘A Visit to Peek Frean and Co.’s Biscuit Works’ was filmed by Cricks and Sharp, essentially making the factory the subject of one of the world’s earliest documentary films.

Peek Frean grew to become one of Bermondsey’s largest employers and by the 1940s some 4,000 people worked at the factory. Staff were well looked after, with free in-house dental and eye care and plenty of social clubs to keep them entertained.

A colourful selection of adverts from Peek Frean’s heyday.

In the late 1920s, the company branched into the cocktail snack market, developing the savoury Twiglets. The nibbles were developed by Monsieur Rondalin; a Frenchman who was employed at the factory as a technical manager.

Sadly, Peek Frean’s Bermondsey plant ceased production in 1989. The buildings remain however, and have since been converted into The Biscuit Factory; a complex of studios and office space.

Despite the closure of the London site, Peak Frean continue to churn out biscuits- the company now operate a large factory in the East York area of Toronto, Canada… the address of which is Bermondsey Road!

On January 21st 1947, a steam train collided with an electric train in heavy fog on the viaduct above Blue Anchor Lane. Although the wreckage looked pretty nasty, there was luckily just one minor injury. 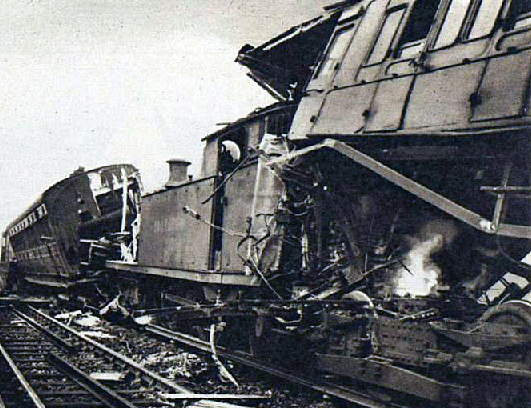 Years before, in August 1872, a horrific murder took place on Blue Anchor Lane when a notorious local drunkard and barber named James Daniel Rogers slashed his wife’s throat after returning from a family day out to Hackney’s Victoria Park. 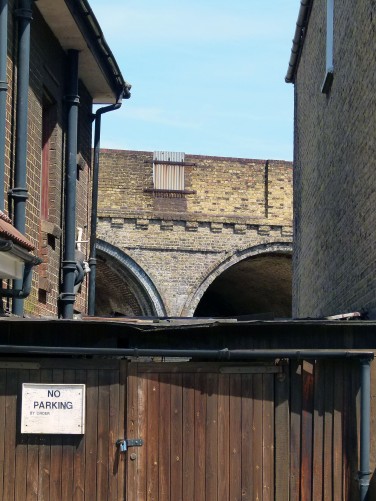 Although the chief surgeon at Newgate gaol stated that Rogers was “perfectly sane”, the jury thought otherwise and found the defendant “not guilty, on the ground of insanity”… a verdict which saw the barber incarcerated nonetheless.

This wasn’t the first time such a violent deed had been committed on Blue Anchor Lane.

In 1802, it was reported that a Mr Spencer was “passing Blue Anchor Lane, Bermondsey” when he was:

“Stopped by three footpads, who knocked him down and robbed him of his pocket book, which the villains were not content with…they dragged him into a field, stripped him naked except his breeches, and then beat him with bludgeons in the most inhuman manner; they then threw him into a ditch where they left him for dead. He was discovered some time after by his groans…”

Named after a local pub (which still stands), Blue Anchor Lane is an offshoot of the much longer Southwark Park Road- which itself was once known as Blue Anchor Road.

It was on Blue Anchor Road that the process of canning food was pioneered by the engineer, Bryan Donkin.

Born in Northumberland, Bryan Donkin came to Bermondsey in 1802 where he established a factory on Blue Anchor Road (on what were then open fields), the purpose of which was to produce machines for manufacturing paper.

By 1812, Donkin felt confident enough to branch out into other ventures and began to experiment with preserving food in sealed, iron containers. 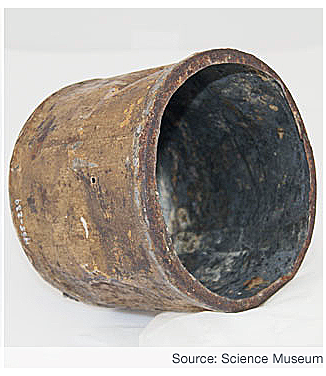 An early Donkin can. (Image: Science Museum via the BBC).

His trials were a success- the preserved food even receiving a written endorsement from King George III- and by 1818, Donkin’s Bermondsey cannery was supplying the Royal Navy with over 20,000 cans of meat, soup and tinned vegetables per year; a deal which revolutionized the military after years of hard biscuits, salted meat and malnutrition.

Being in its infancy, the process of canning was done by hand; the tins specially crafted with a hole left in the top, into which the food was poured.

The hole was then covered with a metal disc- soldered on to provide the seal- and the tin then heated for an hour in boiling water. If the can wasn’t heated for long enough however, some bacteria could survive, turning the contents into a putrid, stinking mess which no doubt offended the nose of many an early consumer.

Another risk came from the lead used for soldering which would slowly leak into the food over time.

Andy Warhol’s famous 1962 ‘Campbell’s Soup Can’… which, in a roundabout way, may not have existed if it were not for Bryan Donkin’s Bermondsey plant!

It would take many years before someone had the bright idea of inventing the can opener- in the early days, the containers had to be cracked open with a hammer and chisel or, if you were feeling brave, by attacking the tin with a sharp knife.

Donkin’s cannery was later merged into the Crosse and Blackwall empire and the site of the pioneering factory is now occupied by The Harris Academy school.