Secrets of the Viaducts: Walking the London Bridge to Greenwich Arches (Part Four) 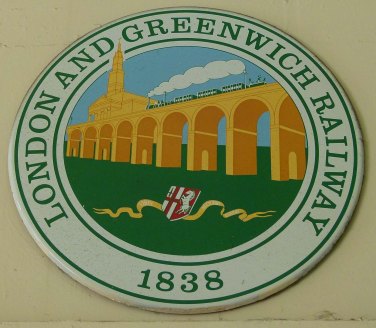 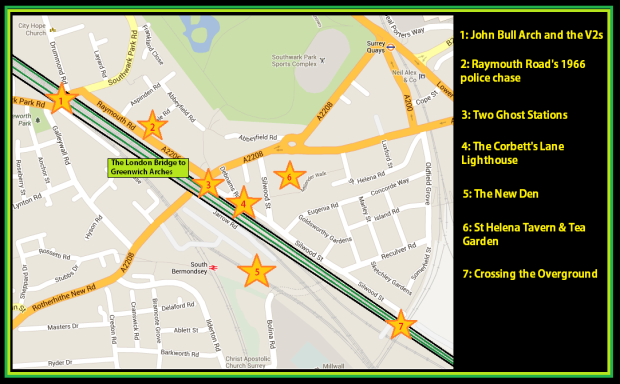 Under the shadow of the V2s

The point at which the London Bridge to Greenwich viaduct spans the junction of Drummond Road and Southwark Park Road is known locally as ‘John Bull Arch’; a reference to a pub which once stood nearby. 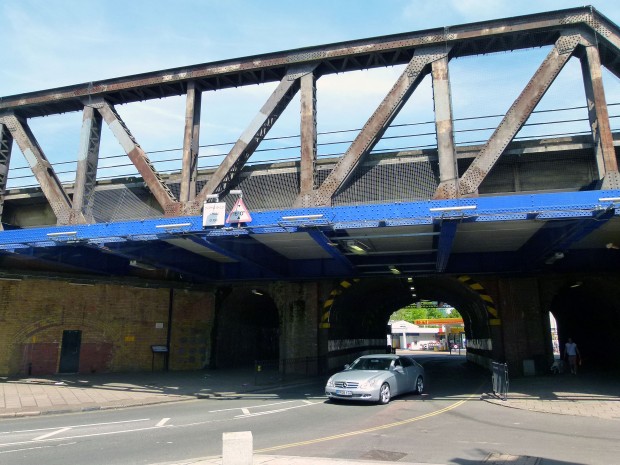 In the autumn of 1944 the original arch and its namesake pub were wiped out in two V2 rocket attacks which, although occurring several days apart in late October and early November, managed to strike the exact same spot in an extremely unlucky twist of fate.

A total of 11 civilians were killed by the blasts. 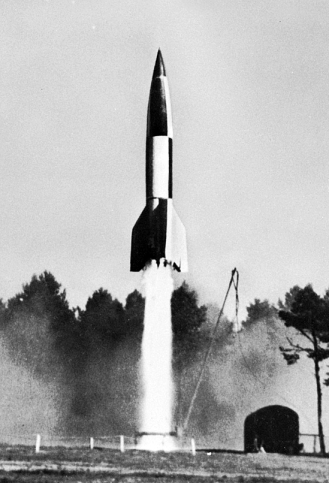 After being fired from Nazi occupied territory, the fearsome 13 tonne rockets would soar into sub-orbital spaceflight before hurtling back down towards their target at over 3,000 miles per hour- almost four times the speed of sound which meant no warning could be given of the terrifying weapon’s approach.

By the time the sonic boom and explosion cracked through the air, most of the rocket’s victims would already be dead.

During the final years of WWII, over 1,400 V2s were launched towards Britain, 500 of which were aimed at London.

The capital’s southern suburbs suffered greatly under the rockets; primarily due to the influence of Eddie Chapman; a former safecracker and Wormwood scrubs inmate whose roguish nature made him the ideal double-agent during the war. 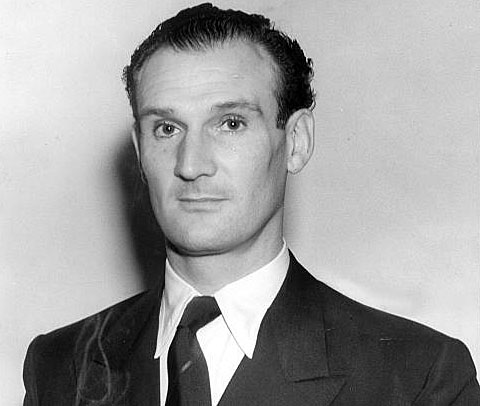 During the V1 and V2 campaigns, Eddie fed the Nazis misinformation regarding the accuracy of Hitler’s vengeance weapons, leading the enemy to believe that their missiles were striking their intended targets in central London; a ruse which reduced their impact on Britain’s war effort and no doubt saved a great many from being killed and injured.

Tragically though, this meant that those in the suburbs had to bear the brunt of the deception’s consequences.

The worst V2 attack on England occurred on November 25th 1944 on New Cross Road, just 1.5 miles south of the John Bull Arch which had been smashed a few weeks before.

At 12.26pm that afternoon, the New Cross branch of Woolworths suffered a devastating V2 strike whilst packed with shoppers who’d rushed to the store after hearing that a supply of saucepans- rare and coveted during the days of rationing- were in stock. 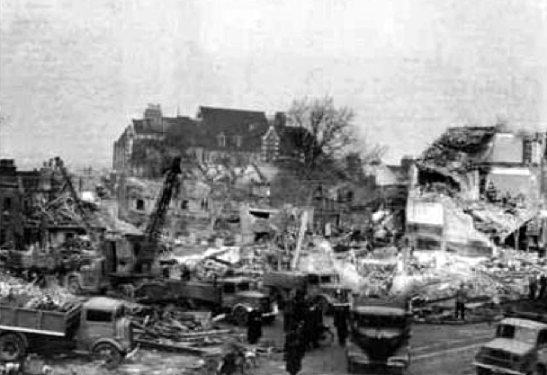 168 people perished in the blast with a further 121 seriously injured. The site today is now home to a branch of Iceland. 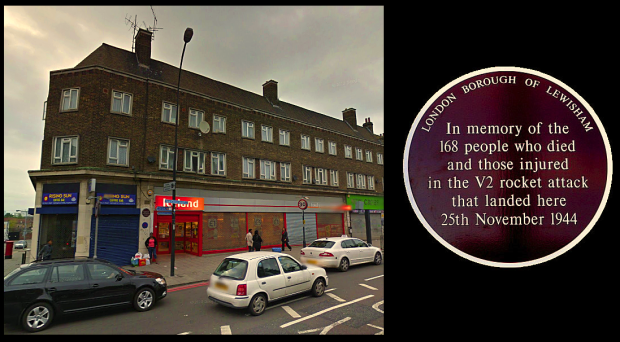 The chief developer behind the V2 rocket was Wernher Von Braun; the scientist who famously went on in later years to work for NASA where his expertise led to the design of the Saturn V moon rocket. 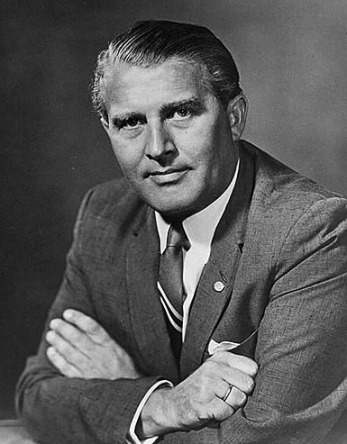 Despite his work for the Nazis, the regime was deeply suspicious of Von Braun.

In 1943 he was arrested and imprisoned by the Gestapo for concentrating his research on peaceful rather than military purposes; a mind-set which was considered a crime against the state. The scientist was also accused of plotting to flee Germany, taking his secrets to the allies.

It was only thanks to the intervention of high ranking Nazi, Albert Speer- who insisted that Von Braun was their only chance of obtaining rocket technology- that the scientist was spared.

Forced to gear his ideas towards the delivery of death and destruction, Von Braun was in a sober mood when informed that the first V2 had successfully hit London… “The rocket worked perfectly,” he told friends, “except for landing on the wrong planet.”

There is another important V2 site a little further along the viaduct, which we will come to in the final instalment of this series.

After the war, John Bull Arch was rebuilt in its current form and the area beneath the bridge is now home to a collection of cast-iron artworks which were inspired by the shapes and designs of biscuits baked in Bermondsey’s former Peek Frean factory. 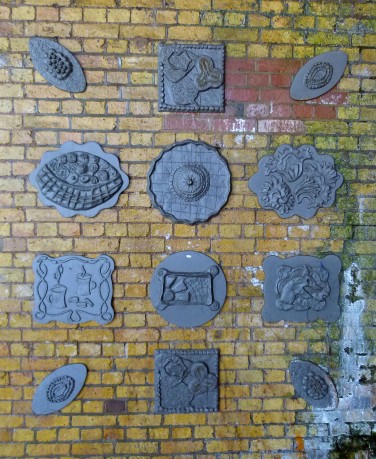 After passing over John Bull Arch the viaduct runs parallel to Raymouth Road which, in August 1966, bore witness to the climax of a dramatic police chase. 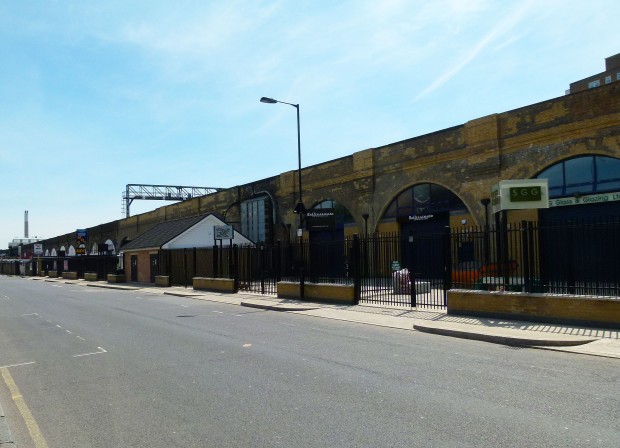 The drama began on Creekside, Deptford (a road also crossed by the London and Greenwich viaduct) where a member of the public spotted a gang of five men, cramming into a Wolseley car and pulling masks over their faces.

Doing his bit for the community, the witness immediately reported his concerns to the police.

Moments after the report had been radioed a patrol car clocked the suspect vehicle and gave chase, the dodgy blokes in the Wolseley firing gunshots at their pursuers as the vehicles tore through the south London streets.

Eventually, the suspect car crashed on Galleywall Road, forcing the masked men to jump out and run off; two of them heading towards Raymouth Road with the police car in hot pursuit.

Cornered on Raymouth Road, one of the crooks aimed his gun at the cops, ordering them out of their vehicle and taking over the driver’s seat.

Unfortunately for the fugitive, the hijack was short-lived… as he sat trying to work out the patrol car’s controls, he let his guard drop and promptly found himself struck around the head by a police truncheon! 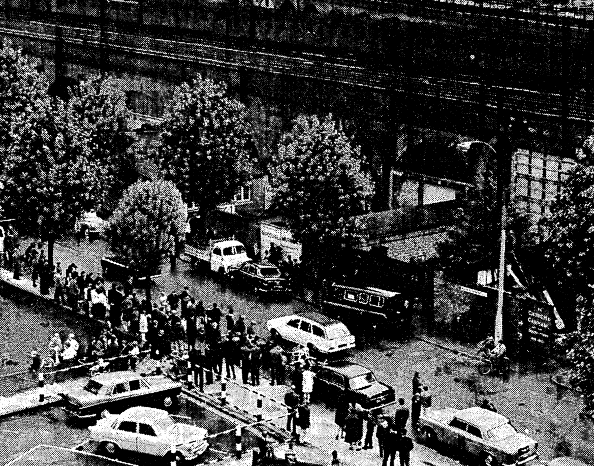 The chase came at a time of heightened tensions for the Metropolitan Police as it occurred just two weeks after the horrendous murder of three policemen on Braybrook Street in East Acton… and, at this point, the prime suspect for that triple killing- the notorious Harry Roberts- was still at large.

The incidents however proved to be totally unrelated and Roberts was apprehended three months later. 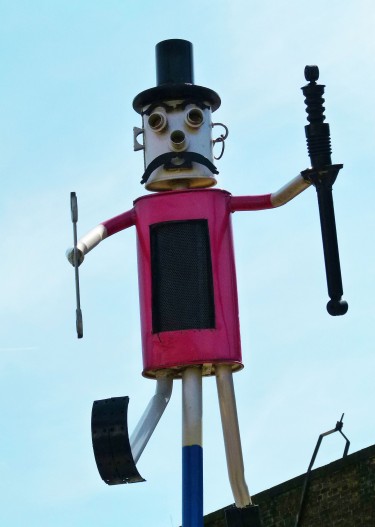 After passing Raymouth Road the viaduct approaches Corbett’s Passage/Lane; a now narrow alley which was once the site of two separate railway stations, both of which have since long vanished. 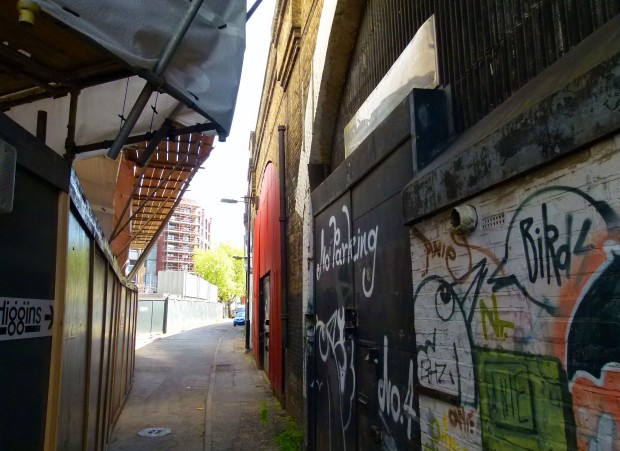 The first- ‘Commercial Dock Station’ was in service for just 11 years between 1856 and 1867. No trace remains today although it can be spotted on maps from the period: 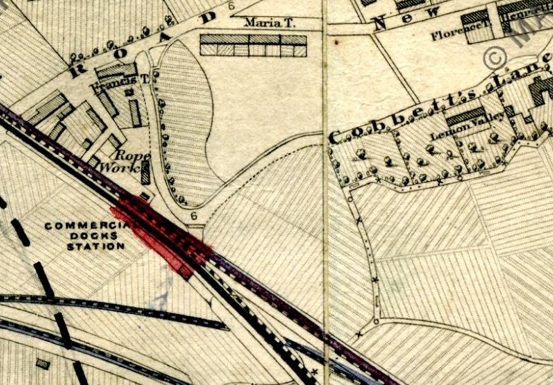 Commercial Docks Station depicted on a map from 1864 (image: mapco.net).

The second; ‘Southwark Park Station’ opened on the same site in 1902 but faced immediate competition from a number of bus and tram routes which were flourishing locally. 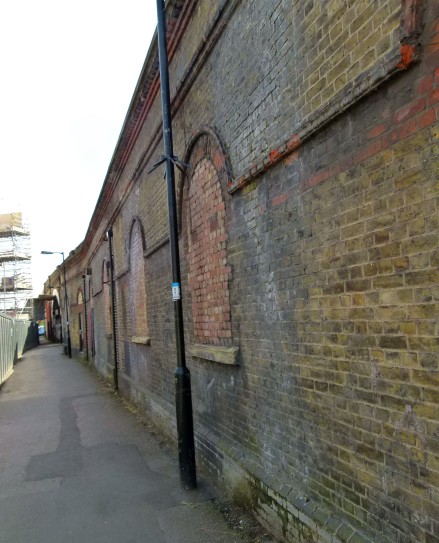 Bricked up windows of the former Southwark Park Station.

The late 1830s saw the founding of The London and Croydon Railway which also operated out of London Bridge, sharing tracks with the London and Greenwich Railway as far as Corbetts Lane.

At Corbetts Lane, the Croydon contingent constructed their own viaduct which branched off southwards from the original arches, thus creating one of the world’s first major railway junctions. 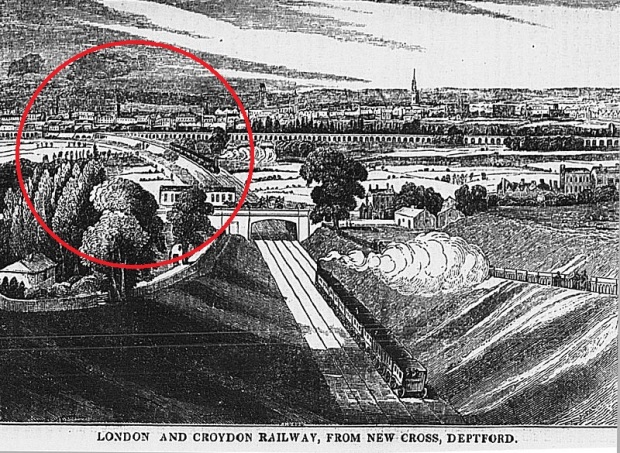 Early depiction of the London and Croydon Railway’s southern branch. The junction at Corbetts Lane is circled in red (image: Wikipedia).

To oversee this new-fangled jumble of tracks, a policeman was stationed in a wooden tower on the viaduct above Corbetts Lane to oversee the movement of trains, essentially making the set up the world’s first signal box.

The early signal man was aided by a large, white disc which would be spun forwards or sideways to indicate the direction at which the points were set.

At night time, red and white lights were used; a novelty which soon led the tower to be nicknamed the ‘Corbetts Lane Lighthouse’. 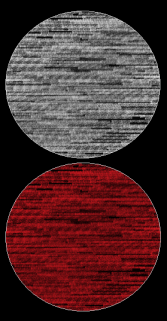 On the south side of this early junction stands The (New) Den; home to Millwall F.C since 1993. 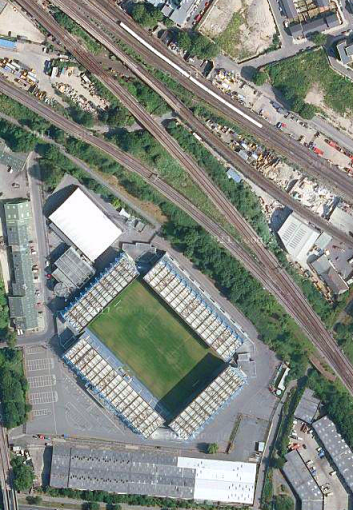 Satellite image of The Den and railway junction (image: Google).

Replacing the famously intimidating original Den which had been located on nearby Cold Blow Lane, The New Den was the first football venue to be built in London since 1937.

With a capacity of 20,000, The New Den was also Britain’s first all-seater stadium to be built following 1989’s Hillsborough disaster. Consequently, its design was very much geared towards safety and crowd control, incorporating short, quick escape routes.

Inside The Den (image: Wikipedia).

Costing £16 million to build, the stadium was opened by the then leader of the Labour Party, John Smith who died suddenly the following year aged just 56.

Corbetts Lane runs into Silwood Street; a grubby, isolated road which has been plagued with illegal dumping for many years. Although this antisocial blight still goes on to some extent, the area is starting to undergo redevelopment. 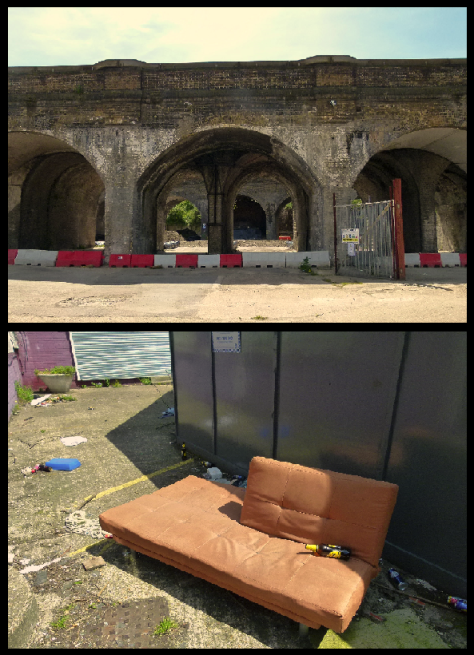 Scenes from Silwood Street… the London and Greenwich arches and signs of fly tipping..

When the London and Greenwich Railway opened, the land surrounding this area was very much open countryside.

The area now covered by the Silwood Estate was once home to the ‘St Helena Tavern and Tea Gardens‘ which were established in 1770 and offered a pleasant excursion for over 100 years until being swallowed up in 1881 by London’s rapid sprawl. 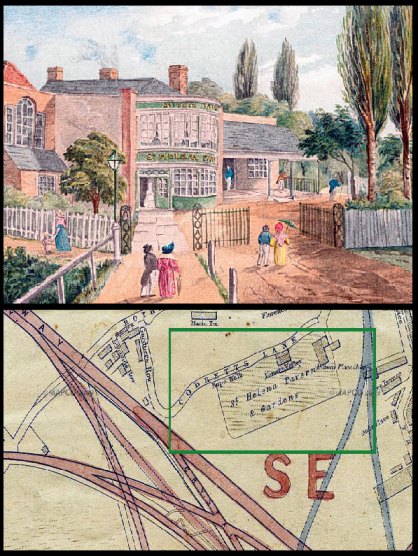 The St Helena Tavern and map indicating its former location.

At the end of Silwood Street, the viaduct crosses over another of the capital’s railway lines- the London Overground (formerly the East London line) where you can get up close and personal with the electrified tracks… 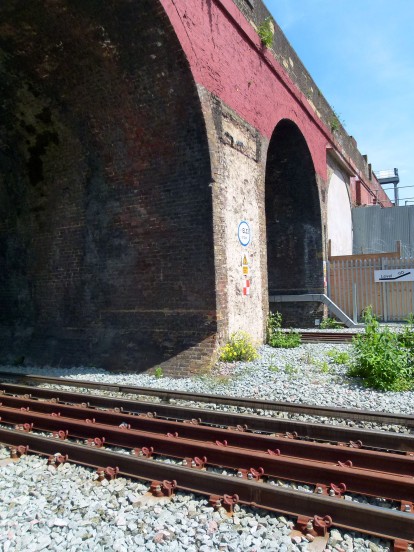 Tracks over tracks… the viaduct crosses the London Overground. 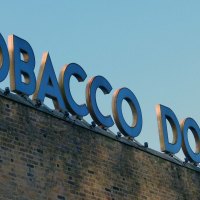 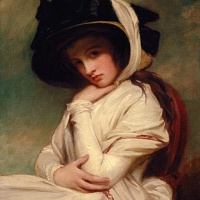 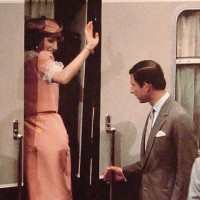