From Prayer to Palestra: The Ring at Blackfriars

“In the clearing stands a boxer

And a fighter by his trade

And he carries the reminders

Of every glove that laid him down

Or cut him till he cried out

In his anger and his shame

But the fighter still remains…”

From the ancient Roman amphitheatre to the recent 2012 Olympic village, London has been home to an impressive array of sporting venues over the centuries.

One such arena, now sadly long vanished, was ‘The Ring‘; a boxing stadium which once stood on Blackfriars Road in Southwark.

Although established as a boxing venue in 1910, the actual building dated all the way back to 1783; originally designed as a chapel by the Reverend Rowland Hill- who reportedly opted for the unusual, circular design so that there would be no corners in which the devil could hide….

Decades later, the man responsible for overseeing the chapel’s conversion from prayer to pugilism was Dick Burge, a former English Middleweight champion who hailed from Cheltenham in Gloucestershire. 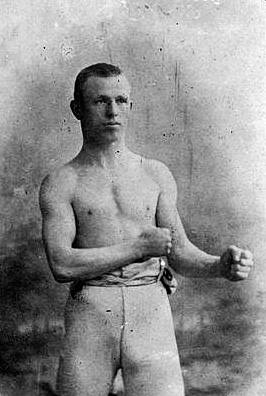 Dick Burge in his prime.

Dick retired from the noble art in 1900 but, whilst living on Wiltshire Road in Brixton, he soon found himself encountering financial difficulties.

Foolishly, he sought to remedy his woes by participating in a huge Liverpool-based bank fraud which involved a risky mixture of cheque forgery and high-stakes racecourse gambling.

The scam was soon rumbled and Dick was arrested in October 1901; just one month after he’d married his wife Bella at Brixton registry office.

Tried and found guilty for his part in the crime, the former boxer was sentenced to ten years hard labour.

During the chaos, Dick- who had already proved himself to be a well behaved, model prisoner- courageously risked his neck in order to save a guard whose life was under threat from the rampaging mob.

Thanks to this commendable redemption, Dick was released from prison two years early and promptly vowed to return to a more law-abiding life. 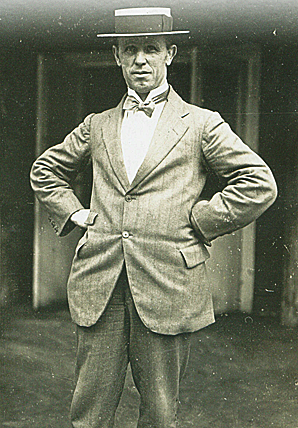 Supported by his wife Bella, who had stuck by her man throughout the prison term, Dick succeeded in renting out the old, circular chapel on Blackfriars Road.

By this point, Rowland Hill’s old place of worship had fallen into use as a warehouse and was in a very sorry state.

Undeterred by the task ahead, Dick and Bella enlisted the help of local homeless people to clean out the building and transform it into a state fit for presenting boxing to the public.

The Ring opened on the 14th May 1910, quickly attracting keen crowds- and with the Blackfriars arena staging events four to five times a week, there was certainly plenty for fight fans to indulge in.

Not forgetting the help they’d received from London’s homeless, Dick and Bella set up a soup kitchen which they ran from the building during the quieter daytime hours.

Just four years after The Ring opened, The Great War erupted and Dick, never one to shy away from a fight, enlisted with the First Surrey Rifles.

Tragically, the former boxer contracted pneumonia in 1918 and died a few months short of the war’s end.

By this point, he had become a very popular character and some 2,000 mourners attended his funeral at St Marylebone Church. Following the ceremony, Dick’s body was taken to Golders Green for cremation.

The death of Dick Burge however didn’t spell the end of the boxing venue.

On his death bed, Dick had asked his beloved Bella to ensure that she kept their business going. Not wishing to let her husband down, and having practically run the venue since Dick’s enlistment in 1915, Bella promised her husband that she would do so; a vow which essentially resulted in her becoming the world’s first female boxing promoter. 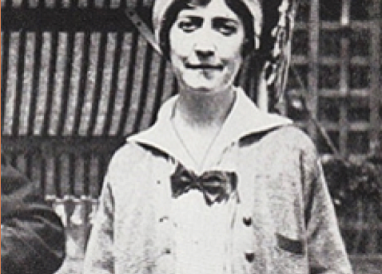 Bella was a tough cookie; a New Yorker by birth who, aged four, had come to London with her mother following the death of her father.

Like her late husband, Bella knew how to put on a good show- she’d worked on the stage and had also been the dresser to one of music hall’s greatest performers; Marie Lloyd; a star with whom Bella became close friends.

When it came to running the Blackfriars boxing arena, Bella was purely hands on, involving herself in every aspect of the venue’s smooth running- right down to personally booting out drunken troublemakers.

Much loved by the local community, the pioneering promoter soon earned an affectionate nickname; ‘Bella of Blackfriars’. 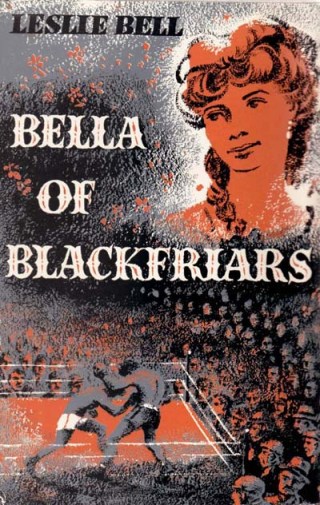 ‘Bella of Blackfriars’- cover of a 1961 book detailing the life of Bella Burge.

So successful was The Ring under Bella’s leadership that, in 1928, the Prince of Wales- who was a keen fan of the noble art- decided to pop by and enjoy an evening’s boxing at the Ring; the main fight that night being between two highly regarded fighters; Manchester’s Len Johnson and Birmingham’s Jack Hood. 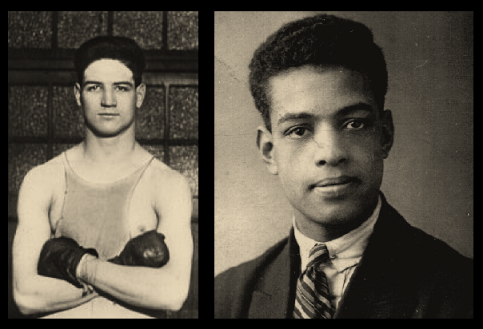 Jack Hood (left) and Len Johnson (right) who boxed at The Ring in the presence of the Prince of Wales.

During his visit, the Prince was greeted by loud chants of “for he’s a jolly good fellow!” which was rather ironic considering he would later go on to become King Edward VIII; the monarch whose 1936 abdication threw the monarchy into crisis…

In 1932, The Ring added more strings to its bow when it added wrestling to the bill…. and the odd Shakespeare play, performed by the local Bankside Players drama group.

A 1930s London Transport advert listing wrestling at The Ring.

By by the late 1930s  however and with the clouds of WWII looming, The Ring began to experience fiscal problems which soon became so tough, Bella was forced to pawn her jewellery and other valuables in order to pay the venue’s staff.

Sadly, her stoic attempts would prove to be in vain.

At the height of the Blitz, one night in October 1940, The Ring suffered a direct hit.

The Ring in ruins (image: Nickel in the Machine website)

The 18th century building, which Bella had steered to greatness after a promise to her dying husband years before, was wiped out in a flash.

Smashed trams on Blackfriars Road, a few yards away from the bombed Ring (image: Nickel in the Machine)

To this day, substantial damage from the raid which blasted the popular boxing venue, is still clearly visible beneath the railway bridge spanning Blackfriars Road.

Blackfriars bomb damage, just across the road from the former Ring venue.

Years later in 1958, Bella Burge was invited onto an early episode of This is Your Life and, in 1961, a book about her entitled ‘Bella of Blackfriars’ was published and serialized in newspapers (the cover of the book can be viewed earlier in this article). 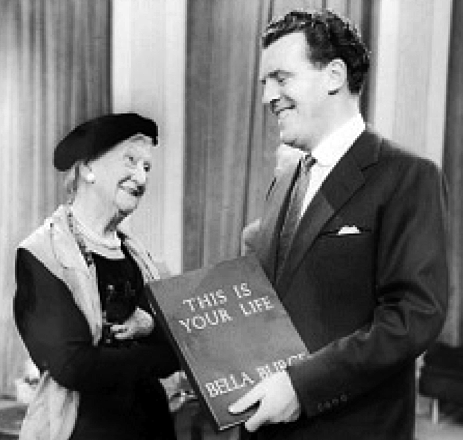 The Ring bombsite remained in tatters until the 1960s when a modern office block named ‘Orbit House’ was constructed over the ruins. Orbit House became home to the India Office’s library and archive (now housed in the British Library).

By 1998 this block had also plunged into ruin and, in the first decade of the 21st century, Orbit House was demolished and replaced by an ultra-modern structure called ‘The Palestra’.

Quite fittingly, Palestra is an Ancient Greek term denoting a public arena for wrestling.

The futuristic office complex is now the HQ for Transport for London… something which I’m sure commuters will appreciate considering how much of a fight it can be contending with tubes and buses during the height of the rush hour!

As the base for Transport for London, the Palestra is also the venue where those studying The Knowledge of London (the intense training course you must pass in order to become a London cabbie) attend their ‘appearances’; verbal examinations which are a true wrestle for the mind!

To find out more about my own experience of this process, please click here.

As well as the Palestra’s referential name, a few subtle reminders of Dick and Bella’s much beloved arena can be found nearby.

About half a mile away, in a rather forlorn, windswept section of the Southbank complex (just off of Belvedere Road, near the Purcell Room), a simple mosaic of Bella Burge can be seen embedded into the pavement.

Another mosaic in the set depicts Ernie Izzard; a boxer who lived in Herne Hill and cut his teeth at the Blackfriars ring. Other local heros- including Daley Thompson and Kevin Spacey- can also be glimpsed on this understated walk of fame.

Closer to the Palestra itself, you’ll find The Ring boxing gym on Ewer Street and, right across the road from where the legendary arena once stood, there’s The Ring pub; a boozer which boasts an array of boxing memorabilia… the perfect place to raise a toast to one of London’s most fascinating, lost sports venues.

To see The Ring in action, please click the short clip below, which includes footage of a 1930 bout between Charles Desmet and Jim Shippen.