This is the Central Criminal Court, more commonly known as the ‘Old Bailey.’

The present building, which opened in 1907, stands on the site of the former Newgate Prison; a gaol notorious for its appalling conditions and general wretchedness. As the 18th century writer, Henry Fielding once summed up, Newgate was a “prototype of hell”…

Tucked behind Newgate was a narrow alleyway known as ‘Deadman’s Walk’, so called because the passageway was used to convey condemned criminals as they were led towards their execution.

Today, Deadman’s Walk is known as ‘Amen Court’; a quiet courtyard off of Warwick Lane.

However, despite the far gentler renaming, Amen Court is home to one of London’s most fearsome ghosts… the petrifying ‘Black Dog of Newgate’.

This sinister legend is said to have originated in 1596 when a chap was thrown into Newgate for dabbling in sorcery. Unfortunately for him, his incarceration coincided with a great famine which had struck London.

Starving to death, some prisoners within Newgate had turned to cannibalism; a nasty turn of events which the sorcerer quickly fell victim to; gruesomely slaughtered by his cell-mates who promptly tucked in hungrily- rather like the zombies in the classic 1968 cult film, Night of the Living Dead…

(WARNING the following short clip is rather gory!)

Unsurprisingly, the sorcerer was a bit peeved at being made dish of the day and, several nights after his murder, his spirit managed to conjure up a chilling vengeance; the nemesis coming in the form of a terrifying black dog….

Artist’s (or rather my!) impression of the Black Dog of Newgate

It is said that this wild creature tore into Newgate several nights in a row, ripping limbs off of prisoners and causing others to perish from pure fright. All very far-fetched of course, but it seems that something around this time did indeed cause considerable panic, because a number of guards were murdered by convicts, desperate to escape before the beast returned.

Several of those who managed to flee were guilty of snacking on the sorcerer and, once they’d broken out of Newgate, were promptly hunted down and slain by the fearsome pooch.

Once all of those implicated in the sorcerer’s death had been dealt with, the dog’s nocturnal rampaging came to an end. 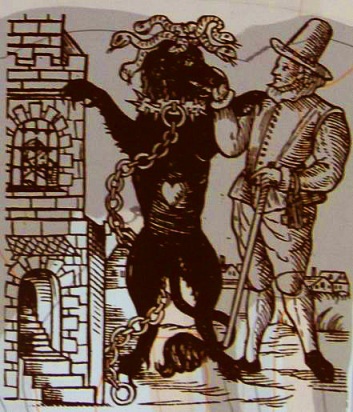 A 16th century portyal of the Black Dog of Newgate

However, to this day, the ghastly canine’s presence continues to be felt.

It is said that Amen Court is haunted by the dog, with numerous accounts reporting that its ghost appears as a shapeless, black form, slithering along walls and giving off a hideous odour. Whenever this apparition appears, witnesses often state that the visitation is accompanied by the sound of dragging footsteps.

Why not pop along to Amen Court one night and take a peek for yourself?…