Situated in the north-west corner of Kensington Gardens, not too far from Bayswater Road and right next door to the Diana Princess of Wales Memorial Playground, you’ll find this gnarly but precious old tree, securely enclosed in a protective cage. 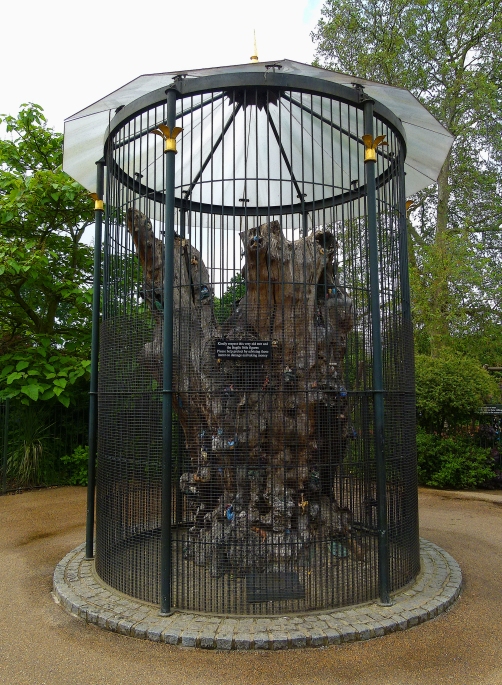 This is The Elfin Oak; a large, weathered stump which originally sprouted in Richmond Park and is estimated to be approximately 900 years old.

Move in closer and you’ll discover that the old tree holds a special secret… that the gapes and grooves in the weathered old bark are home to an array of fairies, imps, elves and gnomes along with their little forest friends. 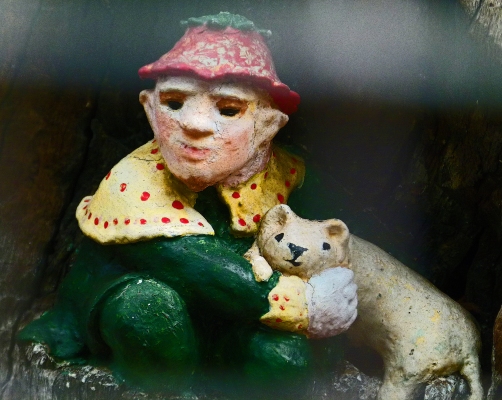 The Elfin Oak’s tiny inhabitants were crafted in the late 1920s by Ivor Innes; a children’s illustrator and, in 1930, the artwork was accompanied by a book; ‘The Elfin Oak of Kensington Gardens’ which was written by his wife, Elsie.

The book provided a magical background to the tree’s long history, describing how it has been home to mystical woodland creatures for centuries; beings that still live “in the nooks and crannies… it is their hiding place by day, their revelry place by night.”

The relocation and modification of the tree owed much to the politician, George Lansbury (grandfather to none other than Angela Lansbury; star of the 1971 Disney film, Bed knobs and Broomsticks…and of course the gentle detective show, Murder She Wrote!)

George Lansbury was a man with heart, striving throughout his career to improve the appalling conditions under which London’s poor lived, especially in the East End where he served as the mayor for Poplar (the Lansbury Gardens Estate on East India Dock Road was named after him as were various other small streets and communal buildings).

Whilst in government during the 1920s and 30s, George Lansbury was made the ‘First Commissioner of Works’, a role which led him to initiate the ‘Brighter Britain’ scheme; a programme which, at the height of the Great Depression, strove to make London as pleasant as possible for its inhabitants, creating parks, lidos, children’s playgrounds… and of course, The Elfin Oak.

By the 1960s, the old tree was starting to look a little tatty. Luckily, it had an influential and equally eccentric fan- Spike Milligan who, in 1966, successfully campaigned to have The Elfin Oak restored.

A few years later, in 1969, The Elfin Oak could be spotted looming behind musician, David Gilmour on the inside sleeve of the Pink Floyd album, ‘Ummagumma’. 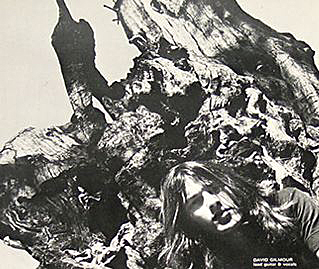 The Elfin Oak- once again with help from Spike Milligan- received further tender loving care in 1997, after which it was awarded Grade II listed status by the then Heritage Minister, Tony Banks who stated that “The Elfin Oak is a wonderful curiosity, loved by Londoners and visitors alike.” 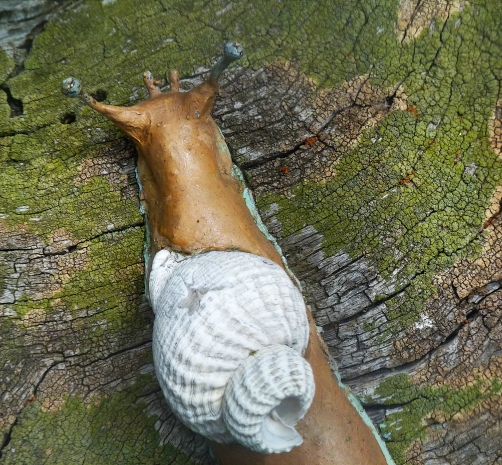 The pictures I have included here represent only a tiny portion of the tree’s lively wee characters… why not pop along yourself and see how many woodland folk and fauna you can find?! 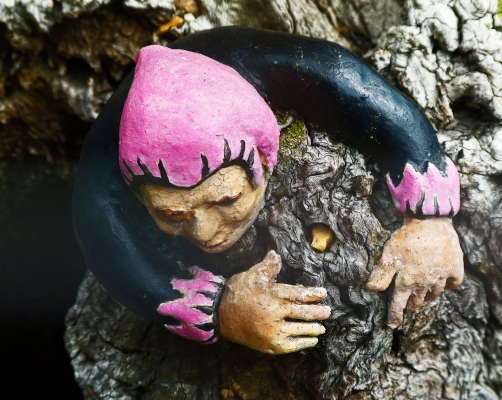