By the early 1960s, the ability of Euston to play its role as a major railway station had once again become a major issue and, in 1961, British Rail decided that the old station was no longer capable of handling its operations.

To British Rail, the solution to this dilemma was simple- and also one commonly employed in the hastiness of 1960s planning…

With no regard for history or the beautiful Victorian architecture, Euston Station was completely demolished.

The Doric Arch, shortly before demolition

It is believed that the final go-ahead for this destruction was granted by the then Prime Minister, Harold Macmillan who was quoted as saying, “An obsession with such buildings will drain our national vitality.”

The annihilation of Euston caused outrage and was labelled as being, “one of the greatest acts of Post-War architectural vandalism in Britain.”

Sir John Betjeman (poet laureate from 1972-1984), along with the newly founded Victorian Society, had campaigned fiercely to have the old station spared.

In this case, they failed, but the indignation caused by the demolition was instrumental in changing attitudes towards old architecture, and their mission was to prove far more successful when it came to saving nearby St Pancras….  (something which I shall be exploring in the next instalment of this station series).

The new and present Euston Station was opened by Queen Elizabeth II in 1968. 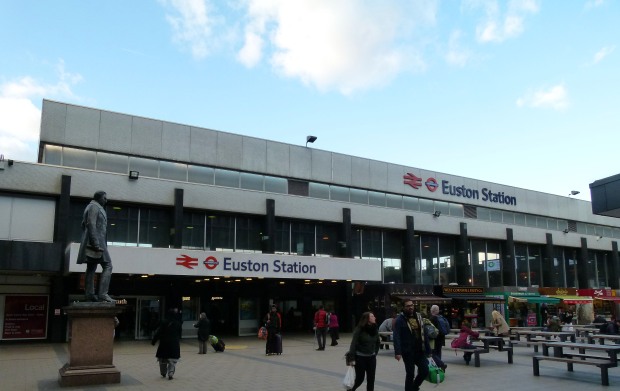 It is a building very characteristic of its time; modern, utilitarian and a fierce opinion-divider. A commenter in the Times suggested that, “even by the bleak standards of sixties architecture, Euston is one of the nastiest concrete boxes in London…” 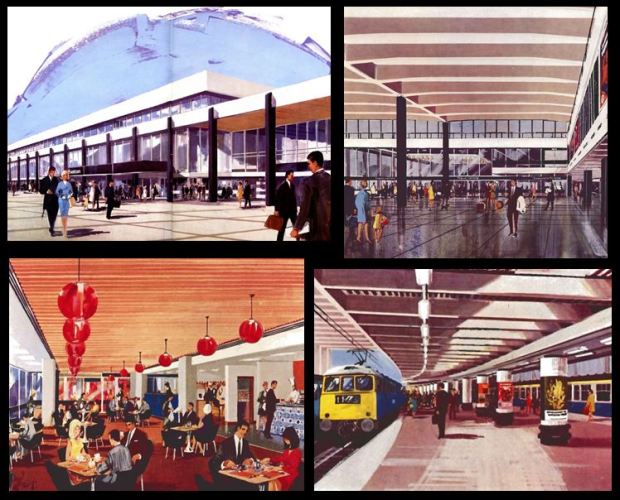 Artistic impressions of the new Euston from a 1960s brochure

It must be remembered that the new Euston was built during an era of rapid social and technological change.

In the 1960s, British rail began to phase out steam engines in favour of diesel locomotives. Steam engines, with their plumes of smoke, required high-vaulted, well-ventilated buildings… diesel engines did not; hence the reason that the Euston we see today is a much lower, dimmer building.

In 1980, Michael Palin made a series for the BBC about Britain’s railways entitled ‘Playing With Trains.’ The documentary began at Euston Station, and Michael Palin was clearly unimpressed with the modern Euston!

The station was also constructed as jet-travel was becoming popular with the masses, and it is believed this was influential in the new Euston’s design. The modern building, with its broad waiting area, huge departure board, dotted information kiosks and long ramps is very similar in design to an airport terminal.

Euston Ticket Hall; then and now

In 1969, pop group, Slade (then known as Ambrose Slade and still a while away from their glam-rock heyday) filmed a very early promo at the brand-spanking new Euston.

Comparing this footage to Euston as it is today, it is surprising to see just how little the station has actually changed (although posters are now written in post-decimal currency!)

Outside the station, Euston’s piazza is a rather bleak affair, dominated by an office complex which was built during the late 1970s. Be thankful for small mercies though… British Rail originally envisioned a cluster of towering blocks to be built in the area. Luckily, Camden Council introduced height limits on new projects; thus ensuring the offices outside Euston were kept a little closer to the ground.

Placed rather unceremoniously amongst these windswept offices, you may come across this abstract sculpture:

Sculpted in 1980, this piece (dedicated to German theatre director, Erwin Piscator), was created by Eduardo Paolozzi.

As discussed in my previous post about London’s ‘Little Italy’, anyone in the UK of Italian origin was detained during WWII. As a 16 year old teenager, Paolozzi was no exception… and, tragically, his uncle and grandfather were killed in the Andorra Star disaster.

After the war, Paolozzi became a noted artist, his style mainly being defined by hints of surrealism and an interest in modern machinery. His 1947 piece; I Was a Rich Man’s Plaything is considered the first major work in the Pop Art movement.

Paolozzi has a number of other public works spread across London. A short walk from Euston, outside the wonderful British Library, you’ll find his sculpture of Sir Issac Newton:

The ‘Head of Invention’ outside the South Bank’s Design Museum is another one of Paolozzi’s, as is what is probably one of the most viewed artworks in London- his colourful, 1980s mosaic designs which decorate the platforms of Tottenham Court Road tube station.

A tiny handful of items from the original, Victorian Euston can also be discovered around Euston Station’s dystopian precient.

One of them is a statue of Robert Stephenson (the main force behind the construction of the line), which once stood in Euston’s grand hall.

Exposed to the elements, and now situated amongst the 20th century modernity, Mr Stephenson stands rather defiant!

Further forward, facing the roar of the Euston Road, stand two ‘lodges’, between which the famous Doric Arch once stood. Today, they house two small pubs.

Speaking of the Doric Arch, lumps of it still remain today… although you’ll require a snorkel and diving gear if you wish to see them, as they are currently languishing at the bottom of the River Lea in East London!

Following the arch’s destruction, the rubble was sold in 1962 and used to plug a chasm in the river’s ‘Prescott Channel’ which lies just east of the Blackwall Tunnel Northern Approach.

In 2009, a number of the stones were recovered (mainly to allow large freight barges, carrying materials for the Olympic Park, to navigate the waterway)

There are currently plans to give Euston Station a substantial makeover.

Taking advantage of this opportunity, The Euston Arch Trust (of whom Michael Palin is the patron) are currently campaigning to have a reconstruction of the old Doric Arch included as part of the redevelopment. 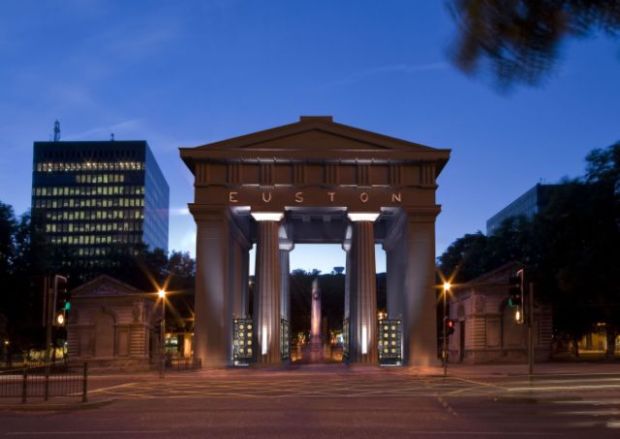 If given the go-ahead, it is hoped that the old blocks from the old arch, which have lain at the bottom of the River Lea for fifty years, will be incorporated into the reconstruction.

You can read more about the campaign here.